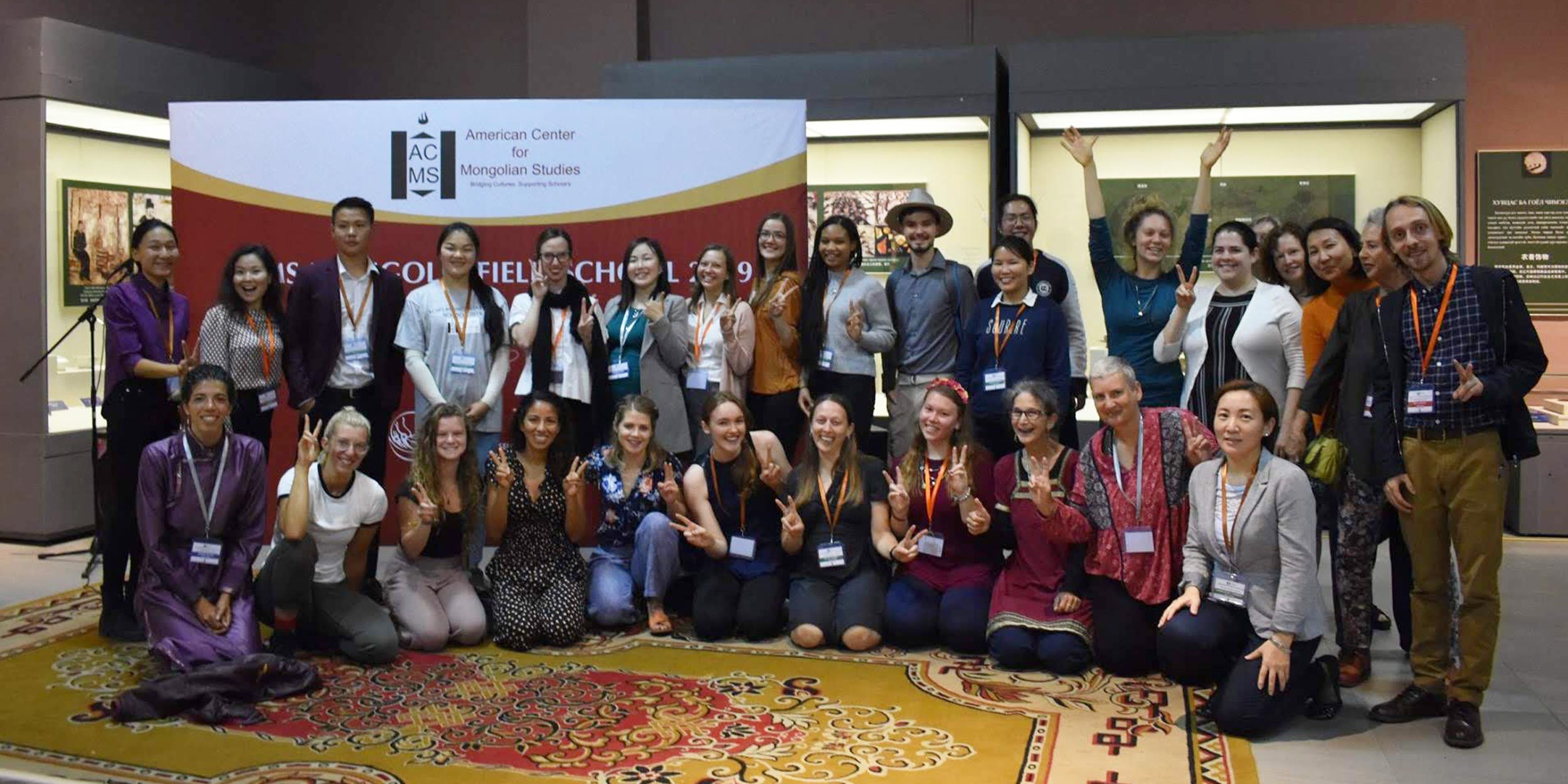 The ACMS has developed several study tour options to help university faculty, students and interested persons gain insight into this dynamic region. The establishment of the Mongol Empire is one of the most important events in world history, representing the zenith of Central Asian cultural dominance on the Eurasian continent. Mongolia has been the location of numerous Turkic and Mongolic empires, as well as a strategic buffer zone between empires, including the modern states of Russia and China. It is the only former Soviet-bloc state in Asia to have successfully developed a functioning democratic political system and market economy. In spite of its historical and geopolitical importance, the role of Mongolia both historically and in the present day is often understated and dismissed out of hand. The predominant and persistent view of the Mongolians remains one of barbaric conquerors, which unfortunately stems in part from a lack of opportunities for people to learn firsthand about Mongolia from Mongolian Studies researchers and original sources. Providing educators the opportunity to learn about Mongolia firsthand can contribute to a more nuanced portrayal of Mongolia’s role in history, as well as a greater understanding of the dynamics of historical and contemporary Asian geopolitics and an appreciation of Asian cultures generally.

In Mongolia, visitors will find a society in transition. Over half the population of 2.5 million people still live in traditional Mongolian tents (yurts), herding goats, sheep, camels, yaks and horses. Mongolia contains the largest common property grazing land in the world, with a sparse population and almost no fences. The landscape includes the Gobi desert in the south, rich grassland steppes in the center, and forested taiga areas in the north.

Mongolia contains the largest populations of many animals in Asia, including snow leopards, cranes, wild horses, vast herds of gazelle and others. Mongolia is famous for its paleontological sites, including the Flaming Cliffs where Roy Chapman Andrews first found dinosaur eggs, and has numerous archeological sites from the civilizations that have ruled the area. Economically and politically Mongolia is the most open country in the region, and China’s appetite for resources is driving a boom in mining and resource development in the country, led by US, Canadian and other international companies. The boom has led to problems with income inequality, as well as threats to the environment.

A visit to Mongolia can easily be combined with a visit to China or eastern Russia. Beijing was established as the capital of China by the Mongols in the Yuan Dynasty, and the legacy of the Mongol city can still be seen in the oldest sections of central Beijing and several museums. The Great Wall was built to prevent Mongol incursions. These sites can be used to introduce groups to the role the Mongols played in history, and the interactions between the people of the grassland steppes north of Beijing, and the agricultural societies to the south. Groups can then travel by train or plane to Hohhot, Inner Mongolia, to learn more about Mongol ethnic minority within China, or directly from Beijing to Ulaanbaatar, the Mongolian capital. The Trans-Mongolian Railway travels from Beijing to Moscow through Mongolia. Areas of Siberia close to Mongolia include Lake Baikal, the world’s largest freshwater lake, Irkutsk, Tuva, and Buryatia. All are accessible by rail or air.

The following are a selection of sample seminar topics. Itineraries can be arranged to fit the needs of specialists focused on one topic, or a series of lectures on different topics for groups that want a general overview of the country. General lectures can be supplemented with one-on-one meetings to allow individual scholars to pursue topics of interest. The ACMS works with high quality local travel agencies and service providers for travel and accommodation arrangements.

The Mongol Empire was the largest in world history, yet the population of Mongolia was never large or technically advanced. How and why did a small group of steppe nomads conquer all the lands under the blue sky from Asia to Europe? Were the Mongols merely a group of bloodthirsty barbarians intent on destroying civilization, as has often been depicted? Are there aspects of Mongolian rule and culture that can now be understood as enlightened or advanced? How do the Mongols view Chinggis Khan and his successors, and what evidence of their travels can be seen in Mongolia? A visit to Mongolia offers a chance to gain a better, more nuanced understanding of the Mongols and the world empire they built. Participants are able to visit historical sites significant in the rise and fall of the Mongol Empire, both in Mongolia and China. These locations include the birth place of Chinggis Khan, the location of his coronation and possible tomb, the ancient Mongol capitol at Kharkhorin, sites in Beijing remaining from the Yuan Dynasty and the Great Wall. Visits are augmented with lectures from leading experts on Mongolian imperial history, placing the Mongol Empire in the larger context of Eurasian development since the 13th century. Chinggis Khan’s place in contemporary culture can also be explored, both in Mongolia where numerous monuments have been built, and in Inner Mongolia.

Mongolian Buddhism is experiencing a revival after nearly 70 years of state sponsored repression under the Communist regime. Mongolia’s historical contributions to Buddhism are significant. Mongolia housed numerous monasteries that are now being rediscovered and rebuilt, Mongolian medicine is a unique field, and Mongolia houses several important, unique Buddhist texts. Participants can learn about Mongolia’s historical contributions to Buddhism, the Buddhist society and theocracy during the Qing Dynasty, the Stalinist purges and destruction of the monasteries of the 1930s and 1940s, and the religion’s reemergence and influence on Mongolia’s secular culture beginning in the 1990s and continuing today. Special topics of interest, such as medicine or visits to specific archives or monasteries, can be highlighted.

Mongolia maintains the world’s largest pastoral commons, with almost half of the population still living in the traditional felt tents of the pastoral peoples of Central Asia. Participants explore the changing face of pastoral nomadism in a country experiencing rapid political and economic change. Opportunities are available to live with local families, participate in the traditional naadam ceremonies including horse races, wrestling and archery, ride horses or camels, help make and drink airag (fermented mare’s milk) or milk tea, participate in a traditional lamb barbecue, and explore the life of a pastoral family.

During the Yuan Dynasty the Mongols formally ruled China, and established Beijing as their capitol. The rise of the Ming Dynasty was a period of decline for the Mongols as the lost their control on China and other parts of their empire. Participants learn about the history of the Mongolian and Chinese relationship during the century of Mongol rule in China, and then several centuries of Han Chinese rule. Includes visits to sites both in Mongolia and China. An issue of contention remains unresolved about Mongolia during the Qing Dynasty (1644-1911) among historical scholars. Some view Mongolia in this period as a vassal state ruled by an incompetent royal class and religious institutions. Others see a dynamic ruling class adept at the politics of Manchu China, making wise strategic choices that preserved Mongolia’s cultural and political sovereignty to the present day. Participants explore these ideas and others related to unflattering and biased historical portrayals of Mongolia that emanate from China and the West.

Archeologists have uncovered numerous sites in Mongolia from Bronze Age nomadic civilizations dating back to the 3rd Century BC. Participants travel to these sites to experience firsthand the excavation process and to learn about what is known of these ancient civilizations and their influence on Central Asian history.

Mongolia is also the location of several Turkic Empires, ruins of which still dot the rural landscape. Participants journey to the ruins of these ancient civilizations and learn about their contributions to the rise of the Mongol empire and their lasting influence on the cultures of the Eurasian continent and local area.

Cold War and Beyond – Asian Geopolitics

Mongolia played an important role in the Cold War, and the region continues to have important strategic importance today. New discoveries from the archives in Mongolia and other Soviet-bloc countries challenge previous interpretations of Mongolia’s relationship with Moscow during the Cold War. Today, despite its small population, Mongolia plays a central role in the region due to geography and historical ties. Mongolia balances its relationship with its two large neighbors with a strong relationship with the US, Europe and other Asian countries. Mongolia has served as an intermediary in the Korean crisis, and has international peacekeeping troops in Iraq and Afghanistan. Participants can be introduced to local academics and government officials working in international affairs, and visits to local archives can be arranged.

Mongolia was the world’s second Communist country and the first in Asia, and was a Communist country under Soviet tutelage for almost 70 years. Participants can learn about Mongolia’s role in the Communist revolution of the 1920s and Mongolia’s participation in the international Communist system. Mongolia’s political history can be explored, including the country’s reaction to Stalin’s drive toward collectivization and his political purges, the destruction of the Buddhist monasteries, the Sino-Soviet split in the 1960s and 1970s, and the era of building Soviet-Chinese friendship, Glasnost and Peristroika in the 1980s that led to the withdrawal of Soviet troops, the fall of Communism and the development of a truly independent, democratic Mongolia. A special focus on the Mongolian “felt revolution” of 1989 and 1990 and the transition to democracy can be arranged, including discussions with important leaders of the events.

Mongolia, unlike its Central Asian counterparts, has experienced a rapid and substantive transition to a democratic and free-market society since the fall of the Soviet Union. In the last 15 years, there have been 3 presidents and 4 peaceful transitions of power between opposing parliamentary governments. Participants learn about the dynamic changes that have occurred politically, economically, and socially, contrasting these experiences with other countries from the Soviet sphere of influence. Social issues, such as the role of women in the society (where over 70% of university students are female), the large number of homeless children, and growing income inequality can be explored.

The Gobi desert owes a great deal of its fame to the Asiatic Expeditions organized and lead by Roy Chapman Andrews through Inner and Outer Mongolia in the 1920s. Participants retrace the steps of the Asiatic Expeditions through the heart of the Gobi Desert visiting the Flaming Cliffs and other significant sites in the field of paleontology, and active sites where researchers are working today. The mini-expedition through the Gobi is augmented with on-site lectures and visits to collections from later expeditions at the Mongolian National Museum.

Mongolia has a relatively pristine natural environment that supports a wide range of species. Mongolian grasslands are some of the largest undisturbed grassland ecosystems on the planet, supporting a wide range of rare species, including the largest herds of migrating gazelle in Asia, wild horses, asses and camels, cranes, eagles, hawks and other birds, and other animals. The mountain areas of the Gobi and Altai are famous for their Argali sheep, snow leopards and rare Gobi bear. Lake Hovsgol in the north is one of the deepest, clearest lakes in the world, and Mongolian rivers maintain populations of taimen and other fish. With a low population density and vast landscape, Mongolia’s natural heritage is an important component of any visit to the country. Visits to protected areas can be arranged to learn about the protection and reintroduction of animals such as the wild Mongolian Takhi horses, and how herding families maintain their livelihoods while also preserving the environment.