The domestication of the horse (E. caballus) was a keystone moment in human history, producing dramatic changes to the way people lived, moved, and interacted in societies across the globe. Perhaps nowhere is the significance of horses more apparent than in the steppes of eastern Central Asia. For nomadic herders living in the Mongolian countryside, horses are a critically important livestock animal, as well as the primary means of transportation. Meanwhile, in the urban capital of Ulaanbaatar, horses remain at the center of Mongolian culture and national identity.

Despite their centrality to Mongolian life, however we know very little about what role horses might have played in the initial formation of nomadic societies. Based on archaeological data, some researchers suggest that Mongolian herders completed the transition to a fully nomadic, herding lifestyle during the late Bronze Age (ca. 1200-700 BCE, Fitzhugh 2009). Around this time, people began constructing stone burial mounds, known as khirigsuurs, as well as elaborately carved standing stones known as deer stones (Figure 1, top image). 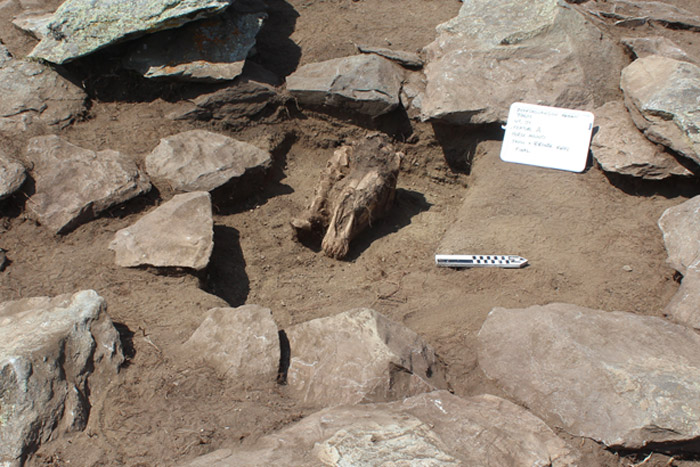 Figure 2. Horse skull, neck bones, and hooves from a stone mound near a khirigsuur

At both deer stones and khirigsuurs, people constructed small stone burial mounds containing the remains of a single horse – particularly the head, neck, and hooves (Figure 2). However, with no historical records and very few other artifacts dating to this period, it has proven difficult to evaluate precisely how these horses were used, or what role horsemanship might have played in late Bronze Age Mongolian social developments. Consequently, we must turn to new sources of information in order to understand how and why nomadic societies and horse culture developed in the region.

One promising way to address these questions is through the osteological analysis of horse bones from archaeological sites. Unlike many other mammals, a horse’s teeth continue to erupt throughout the animal’s lifetime – a trait known as hypsodont dentition. This unique adaptation evolved in part to cope with the gritty, steppe grass diet of ancient horses, which wears down teeth at astonishing rate (McFadden 1994). Fortunately for archaeologists, having this kind of dentition also means that horse teeth change size and shape in a consistent way throughout the animal’s lifetime. Thus, by carefully studying archaeological horse teeth, researchers can estimate the age a particular animal was when it died.

In a pastoral herd, young male horses must be castrated or culled before reaching breeding age, when they will compete for mates and disrupt the herd’s natural hierarchy. Additionally, herders often cull and eat older animals, especially mares, who have outlived their reproductive usefulness (Levine 1999). By analyzing a large sample of horse skulls excavated from near deer stones and khirigsuurs, we determined that most of the sacrificed animals were very young horses, less than three years of age. Furthermore, female horses in the study sample were quite elderly, as old as 15-20 years or more. This pattern is consistent with the practical requirements of managing a horse herd, and suggests that people were breeding and managing horses as livestock in Mongolia during the late Bronze Age. 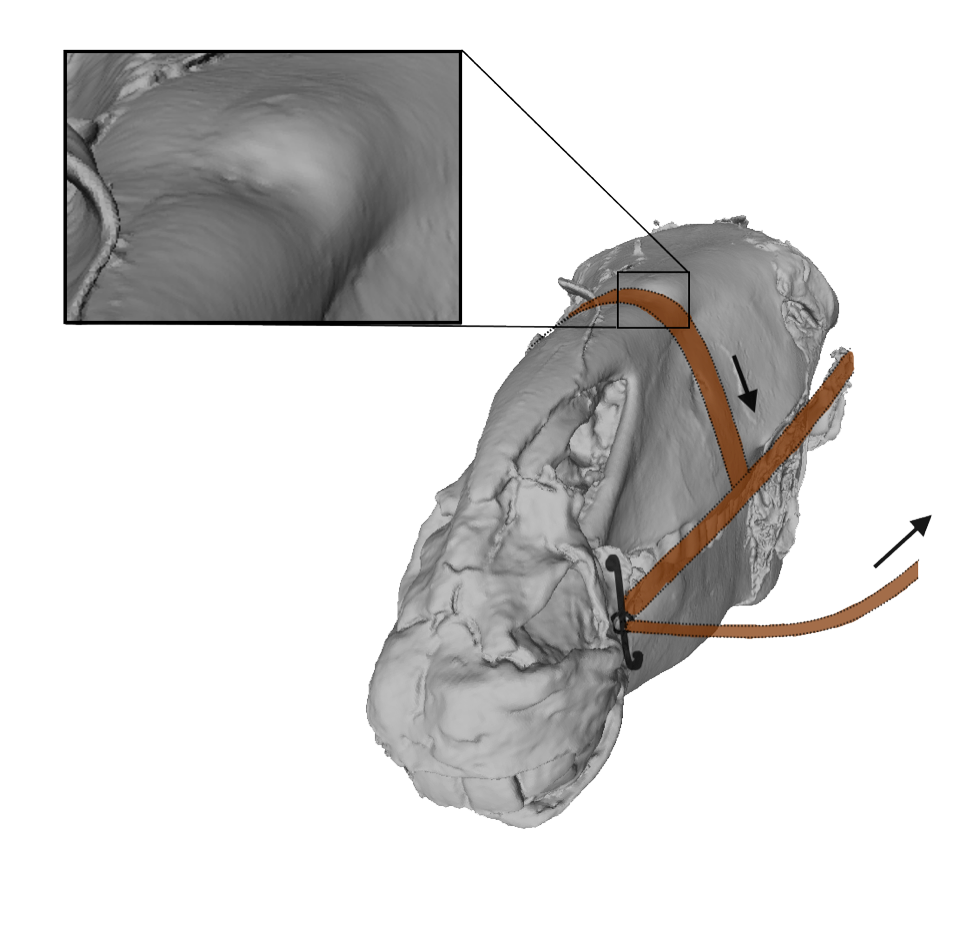 Figure 3. Skull of a mummified riding horse from the period of the Turkic Khaganate (6-8th centuries AD), found in western Mongolia. Dotted lines show the outline of the bridle used during this time, with black arrows indicating the direction of pressure under rein tension. Inset shows a deep depression on the left side of nose, consistent with left-handed rein pulling.

Osteological study of the equine skeleton can also shed light on whether horses were ridden or used to pull chariots or carts. For example, prolonged used of a bridle or halter can produce a characteristic deformation to the skull along the bridge of the nose (Taylor et al. in press). Additionally, some other bridle components, such as a hard cheekpiece or a metal bit, also appear to leave identifiable traces to the premaxilla and teeth of the horse (Bendrey 2007). Unfortunately, ancient charioteers and riders often used very similar bridle equipment, making it difficult to identify exactly what kind of horse transport late Bronze Age people used through osteology alone.

Symmetry in cranial features may help differentiate between horses used for riding or carts/chariots in archaeological assemblages. Contemporary Mongolian herders – as well as ancient warriors depicted in paintings, sculptures, and images— often appear to have controlled the horse primarily using the left hand, while the right was occupied with a whip, lasso, or weapon. Our recent study of modern and archaeological horse skulls definitively used for horseback riding suggests that osteological changes related to bridle use are indeed asymmetrical, in a manner consistent with chronic rein pressure from the left side (Figure 3).  Future research will be needed to evaluate other potential causes for this pattern, but the same kinds of asymmetry appear to characterize late Bronze Age horses from deer stones and khirigsuurs. This could indicate that the horses were used as mounts – perhaps placing Mongolian cultures among the world’s earliest to engage in widespread horseback riding.

Thus, despite the absence of historical records, archaeological data suggest that early nomadic people herded horses during the late Bronze Age. Moreover, many of these horses were bridled, and perhaps used for riding. Consequently, results point to a strong link between changes in domestic horse use and the emergence of mobile, nomadic societies in eastern Eurasia during the late Bronze Age.

Levine, M. 1999. The Origins of Horse Husbandry on the Eurasian Steppe. In Late prehistoric exploitation of the Eurasian steppe. McDonald Institute for Archaeological Research, Oxford 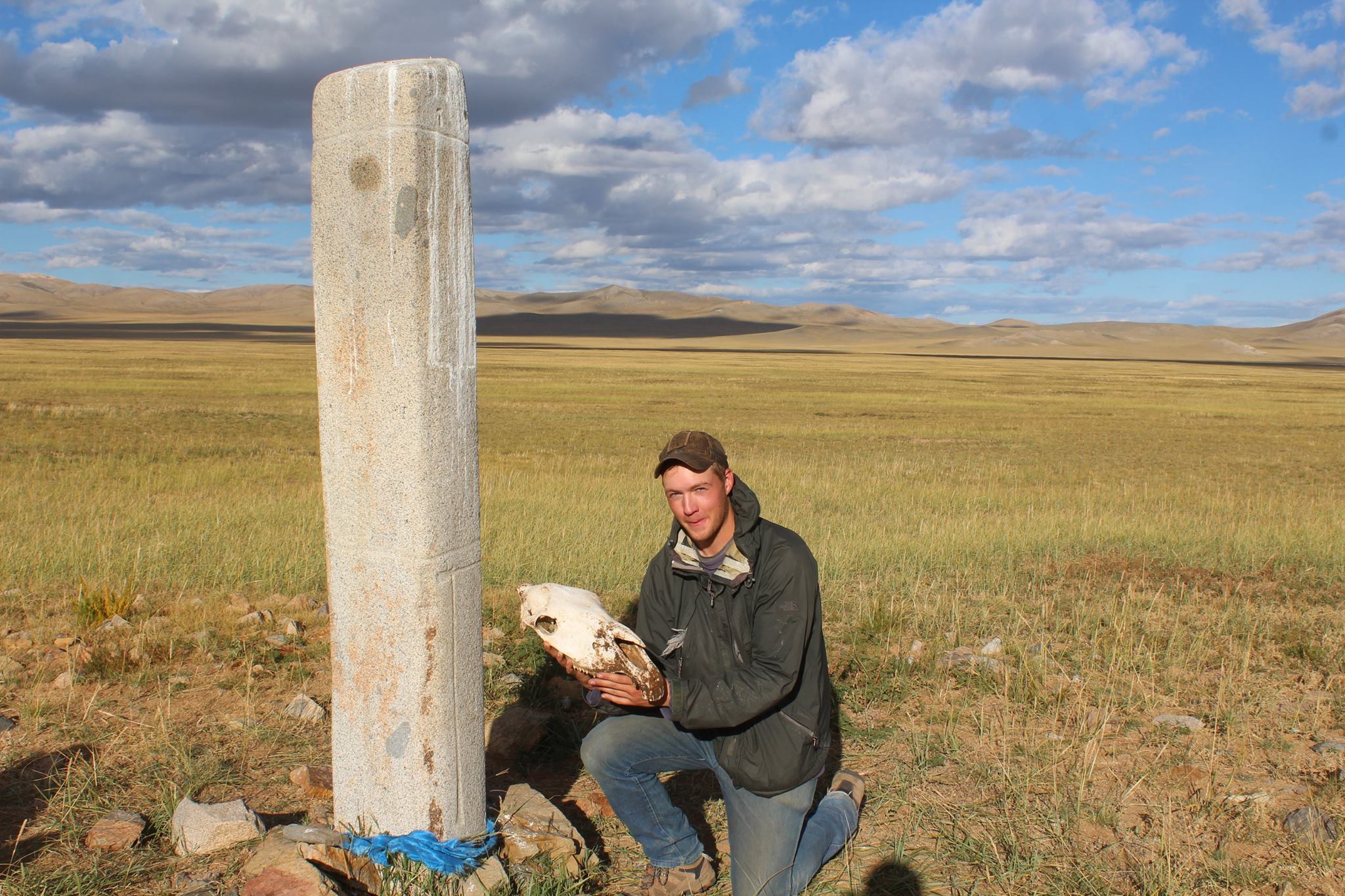 Born and raised in western Montana, William Taylor has been conducting archaeological research on ancient horse use in Mongolia since 2011. After several summers as an ACMS researcher, Mr. Taylor is currently living in Mongolia conducting analysis of archaeological horse collections at the National Museum, as a 2015-16 Fulbright Research Fellow. His research has been recognized and supported by the National Geographic Young Explorer’s Program, the National Science Foundation, the Society for Archaeological Sciences, the International Council for Archaezoology, and the National Collegiate Athletic Association (NCAA).