Above Photo:  The process of mapping out a burial feature

The Ikh Nart Nature Preserve contains a vast array of archaeological sites and artifacts spanning more than 9,000 years of the human history. It is a 66,000-hectare preserve, founded in 1996 and located in Dornogobi Aimag (East Gobi Province) of Mongolia. Ikh Nart consists of semi-desert and grassland steppe environmental zones which foster both biological and archaeological “gold mines.” Ikh Nart is home to one of the last remaining groups of Argali, the Mongolian bighorn sheep, a host of insects, and rare vegetation, which makes it a prime place for biological research and study. Ikh Nart also proves to be an important and rich archaeological area.

Archaeologists from both Mongolia and the United States work collaboratively in Ikh Nart.  Earthwatch, a non-profit international environmental research organization, underwrites archaeological research there and is assisted in the field by volunteer citizen scientists. Drs. Joan Schneider and Arlene Rosen from the United States and Dr. Yaadma Tsrendagva of the Institute of History and Archaeology the Mongolian Academy of Sciences led a group of volunteers and other scientists this past summer in this research project.

As a volunteer, I had the privilege of working with this group in Ikh Nart. Ikh Nart has archaeological features and sites spanning from the Neolithic Period (8000 B.C.E. – 4000 B.C.E.),  the Xiongnu Period (300 B.C.E. – 100 C.E.),  the Great Mongol Empire Period (1206 C.E. – 1370 C.E.) and the Manchu Period (1640 C.E. – 1912 C.E.). Mongolian and Earthwatch scientists working in Ikh Nart have predicted that, based on their statistical random study, that 5,000 archaeological sites may exist there. Thus far, about 150 sites have been assessed and registered at the Mongolian Academy of Sciences, Institute of History and Archaeology in Ulaanbaatar.

While participating in the surveying effort undertaken by Earthwatch in the Ikh Nart Nature Preserve, we came across thousands of artifacts and multiple burial and Balbal features. The artifacts we found while surveying areas suitable for human habitation, such as the areas encompassing river beds, were primarily from the Neolithic Period. These Neolithic artifacts included: blade cores (rock from which small, sharp micro-blades were removed), micro-blades (a small early form of a razor mounted in a wood or bone handle, used to cut), sharpened projectiles (a sharpened double-edged tool to be attached to a spear or arrow for hunting or battle), stone tools and vessels, and pottery shards (used for holding liquids in most case). We also found Manchu Period pottery in the area, which was clearly different than its Neolithic counterpart due to its curved tops and painted sides. 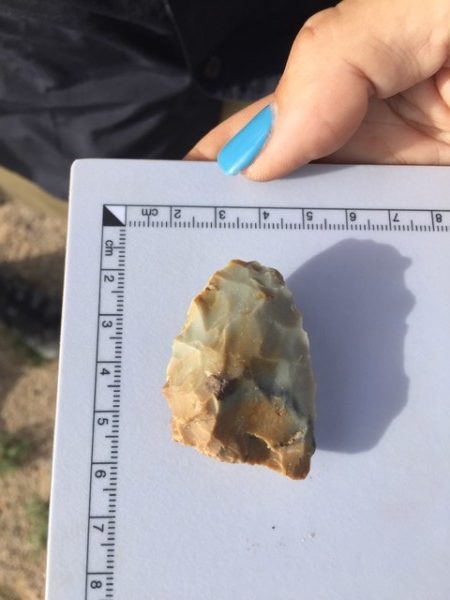 Example of a Neolithic Blade Core

Once we found these artifacts, we would log their coordinates using GPS (Global Positioning System), measure their size, note the type of stone, and any unusual features. This was all recorded in our field notebook, which also included site number, date, and description of the site. These field notebooks will become part of the permanent record of Ikh Nart. We also took photographs to record the artifact’s image and placement. Some artifacts were set aside to be studied further in the lab, but most were logged and then returned to their original location. The decision to study some artifacts in the lab extensively relied on the rarity of the artifact, condition of artifact, and whether it was applicable to ongoing research. The burial features that we found were from many different time periods (Neolithic, Xiongnu, and Turkic). It was relatively easy to find distinctions between the burial styles of the different periods. For instance, some were circumscribed by rocks around the site, while others were marked by rock piles. After finding these burial sites, we would take the GPS coordinates, then meticulously measure and map the rocks and features of the burial from a center-point in the site, the datum point. By mapping the style and features of the site, we could determine the time period and whether or not it had been disturbed by grave robbers, a problem that still haunts sites in Mongolia and around the world. 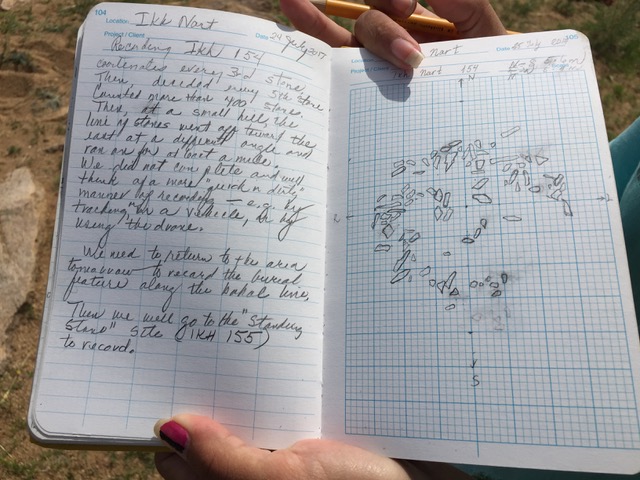 We also looked at a Balbal feature from the Turkic Period, which is an alignment of rocks, one rock for every one man that a certain tribe had killed in battle. This feature was used to intimidate the other tribes by advertising their ferocity in battle. The Balbal feature went on for 1.6 miles. We logged the coordinates and size of every five rocks to study the method and patterns of Balbal building. Also of interest were rock art drawings from both the Neolithic and Tibetan Periods of Mongolia. They included abstract and realistic designs and writing and could be of the painted type (pictographs) or engraved type (petroglyphs). 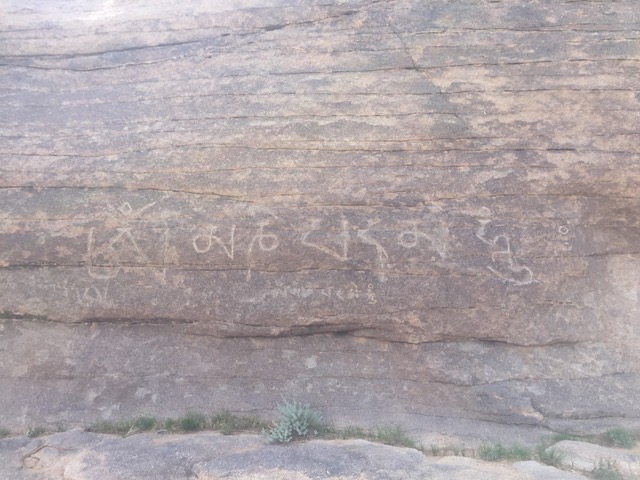 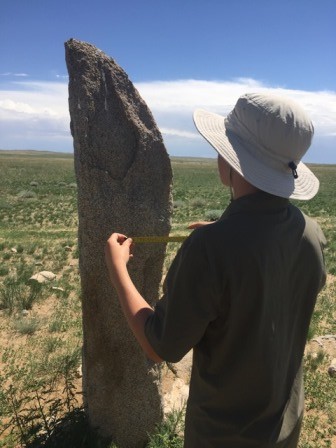 Measuring the dimensions of an archaeological feature called a standing stone

The Ikh Nart Nature Preserve is a special place due to the pristine condition of its unique archaeological sites that have existed for millennia. Part of Earthwatch’s mission is not only to explore and study this area now, but to maintain it in its present state for the future. It is one of Mongolia’s most important heritage sites and merits its designation as a National Nature Reserve and a Protected Area.

Blake Epstein is a current 11-th grade student at the Ranney High School in Tinton Falls, NJ. He is passionate about Mongolian history. In the Summer of 2017, he  traveled to Mongolia and conducted archaeological surveying at the Ikh Nart Nature Preserve of Mongolia which contain artifacts that were thousands of years old and laden with history. 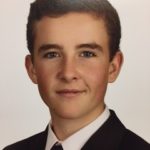