Fantastic Beasts on the Eurasian Steppes: The Politics of Burial Regalia in Iron Age Funerary Art along the Mongolian steppes and further west

In its simplest definition, the term “animal style” is frequently used to describe a group of material comprised of portable luxury goods with zoomorphic designs commonly found in burials dispersed across the large geographic domain of the Eurasian steppe belt. The high-end objects featuring this approach to decoration include headdresses, clothing plaques, belt buckles and textile fragments embellished with detailed scenes of dynamic animal interaction in which anatomically accurate animals as well as hybrid and abstracted zoomorphs are depicted in vigorous acts of predation, hunt or mystic transformation. In the last decade, newly excavated elite burials dispersed throughout the Western Mongolian steppes, the Mongolian Altai region, the Tuva basin, the Kazakh uplands and the Northern Black Sea grassland have shed further light on the various approaches to burial practices among distinct nomadic groups thus challenging the concept of “nomadic unity”; such differences are especially pronounced in the treatment of the body and its systematic decoration before its placement in the tomb. The current discourse will focus on the political and cosmological implications of the strategic placement and ceremonial usage of headdresses in early Iron Age elite burials. I demonstrate that various nomadic entities which inhabited the Ordos Loop and its surrounding regions in the 7th -3rd century BCE invented individual artistic approaches to dealing with the same conceptual problem, that is, the presence of a real-life audience to attend the funerary ceremony and an imagined one to be present in the afterlife. The occurrence of elongated, spiral-shaped gold headdresses, usually accompanied by torques terminating into fantastic animals is a prominent component in the majority of the elite burials discussed in this study, from the Mongolian Altai to the Northern Black Sea steppes of the Dniepr river. Thus, we will delve into the spiritual and political motivations behind the construction of such carefully planned burial attire and its role in the making of the tomb spatial dynamics.

About the speaker: Petya Andreeva

She is a last-year PhD candidate at the University of Pennsylvania’s East Asian Languages and Civilizations Department. Her main research interest is in the cultural and artistic exchange between nomadic entities and sedentary empires in Eurasia. She is particularly interested in the construction of burial space and its role in the intersection between politics and spirituality in the ancient world. Her previous publications include an article on rock drawings in the South Gobi province, co-authored with renowned scholar of Mongolian history, Dr. Christopher Atwood, as well as articles and catalogue entries on various topics in East Asian art, including image and script in modern Chinese art, textiles in Tokugawa Japan and Uyghur imagery in Buddhist complexes in Xinjiang. Petya Andreeva has been awarded Asian art fellowships by various museums in Asia and the United States, including the National Museum of Korea, the University of Hong Kong Museum, the Freer Gallery of Art in Washington DC, and the Nelson-Atkins Museum in Kansas City. In addition, last summer, she received several national grants to carry out her dissertation fieldwork in museums and other cultural institutions in St. Petersburg, Siberia, Almaty and Astana. Petya Andreeva is indebted to the American Center for Mongolian Studies in Ulaanbaatar for their generous help and tremendous support in her academic endeavors in Mongolia. 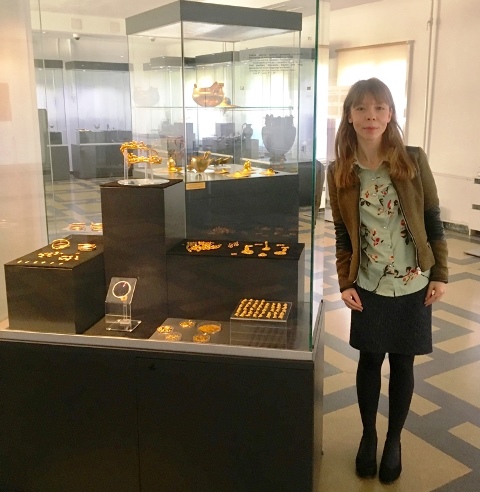