The brief November 2005 visit by President George W. Bush was an important milestone in U.S.-Mongolia relations.  While his visit was the fourth and final stop during that trip to Asia, after Korea, Japan, and China, it was the first ever by a sitting U.S. president, and, as such, represented an important precedent for the two nations.  This paper and accompanying oral and slide presentations will focus on a few aspects of Bush’s four-plus hour stopover in Ulaanbaatar on November 21, 2005.  These presentations reflect the personal, unofficial views of then-U.S. Ambassador (Amb.) to Mongolia Pamela J. Slutz and then-Deputy Chief of Mission (DCM) Mr. Brian L. Goldbeck, the latter being the sole presenter with Ambassador Slutz’s concurrence.  This presentation is a redux of the March 2018 presentation at the Mongolia Society Annual Meeting in Washington, D.C.

In the first part of his presentation, Mr. Goldbeck, who was the Charge D’affaires at the time, will describe the earliest, preliminary October discussions and negotiations with the Government of Mongolia (GOM) that shaped the visit’s structure, timing, and content.  He will also review subsequent preparations later in October and early November leading up to Bush’s Mongolia visit.   The slideshow presentation will serve as an overview of the actual visit and highlight some of the key events during Bush’s time in Mongolia.  Amb. Slutz, who accompanied President Bush throughout his visit, provided her insights into the dynamics of Bush’s official and informal meetings and activities.   Amb. Slutz also summarized her personal reflections on the initial and subsequent results of Bush’s visit, given that the U.S. is one of Mongolia’s important third neighbors.  Finally, Mr. Goldbeck will take questions and comments from the audience.

Mr. Goldbeck was born and raised in Wisconsin.  He received bachelor’s degrees in 1973 in Political Science and 1979 in Education from the University of Wisconsin-Eau Claire and a master’s degree in Systems Management from the University of Southern California in 1985.  Prior to joining the U.S. State Department, Mr. Goldbeck was a teacher and the Social Studies Department Chairman at an international school in Riyadh, Saudi Arabia.  He also served four years on active duty with the U.S. Army and 24 years as an Army Reserve Officer.  He is married to Ms. Narangerel Shirendev from Mongolia and they live in Santa Fe, NM. 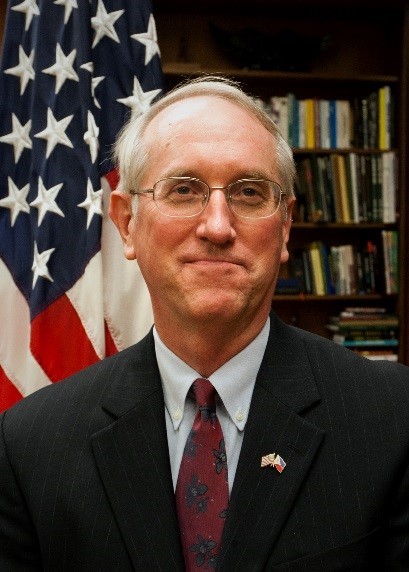