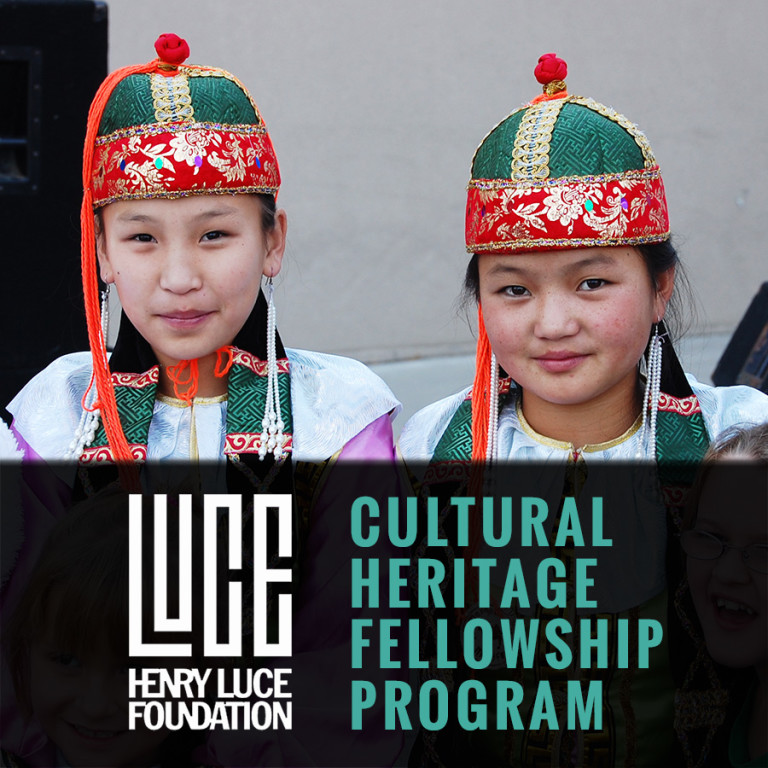 This program has been discontinued in 2018.
The information below is for archival purposes only.

The Mongolia Cultural Heritage Research Fellowship program supports academic research projects that will contribute to the documentation and preservation of the tangible and intangible cultural heritage of Inner Asia, with a focus on the people and geographic area that is now in the nation of Mongolia. The ACMS Cultural Heritage program is supported by a grant from the Henry Luce Foundation.

Fellows will be expected to contribute to the development of data management systems and collections of Mongolian cultural heritage either with their own research materials and/or with the research materials of others, working to make information more accessible to scholars, officials, and the general public. Projects utilizing archives or collections from Mongolian institutions are encouraged, but must be willing to share this data with the ACMS Cultural Heritage Program and Mongolian Cultural Heritage Center, and should be accompanied by a brief letter of support from the host institution. Any fellow who wishes to use the research materials of others, please contact the Cultural Heritage Program (jclark@mongoliacenter.org) for more information on available data sets.

Research projects that relate to the preservation of Mongolia’s tangible and intangible cultural heritage are welcome, from humanities and digital humanities fields such as archival studies, archaeology, language and literature, performing arts, history, religious studies, and others. Social science, natural science, and information technology projects may also be considered if they have a strong cultural element or application to cultural heritage issues. Scholars will have the opportunity to work with ACMS partners and may have the opportunity to take part in workshops and/or trainings funded by the Henry Luce Foundation.

Fellows will be expected to spend some time working directly on Cultural Heritage Project initiative such as workshops, conferences and data management projects when it does not directly interfere with their own research. Project proposals should clearly outline an intended time frame indicating if they are proposing a short-term fellowship (of 1-3 months), or a long-term fellowship (of up to 9 months).

Mongolia has a unique culture and cultural heritage, but one that connects in both historical and contemporary times to other cultures in the region. In the 24 years since the fall of Communism, academic research work in and about Mongolia has greatly increased. Scholars in the humanities have been drawn to the country due to its geographic and historic location at a crossroads within Inner Asia, and the enduring legacy of traditional cultures and lifestyles. Mongolia contains a wealth of archeological sites that bear witness to the many cultures and peoples that have inhabited the region, including important deer stones and other monuments associated with Bronze Age cultures, and sites from the Scythian, Xiongnu, Xianbei, Turkic, Uyghur, Khitan, Mongol and more recent empires. Culturally, Mongolia maintains one of the only enduring nomadic pastoral systems in the world, a legacy reflected in a range of contemporary cultural practices and beliefs, and the nation’s music, art, literature, and poetry. Mongolia’s culture has also been shaped by regional influences, such as Tibetan Buddhism, the cultures of its neighbors including China, Russia and Europe, while also outwardly influencing other cultures through both the Mongol Empire period and contemporary exchanges, such as the global interest in throat singing, which originated in Mongolia.

Mongolia has a number of characteristics that have helped preserve its cultural heritage. The country was isolated during seven decades of Communist rule until 1990, and a relatively large share of the population remains in rural areas, living traditional lifestyles as nomadic pastoralists. The country has a fairly homogenous population, with ethnic Mongols making up approximately 96% of the country’s people along with a small, regionally concentrated population of Kazakhs who enjoy broad cultural and political autonomy. Mongolia is the least densely populated country in the world, with a population of only 3 million people in a land area more than twice the size of Texas. Mongolia contains the largest common property grassland in the world, with its natural habitats and ecosystems largely preserved. While rich in culture and biodiversity, the country’s economy and infrastructure is poorly developed, with a per capita income of only $6000 per person and few paved roads.

The pace of change, however, is accelerating, and Mongolia’s cultural heritage faces a number of threats, including rapid social and economic change. Spurred by China’s huge appetite for resources, Mongolia is experiencing a mining and economic boom, with double digit annual increases in GDP and growing exports of coal, oil, gold and copper. Domestic and foreign mining companies are spread out across the country seeking new resource deposits and developing mines and related infrastructure in once isolated rural areas. The boom is boosting the economy, but also creating social disruptions as people abandon traditional lifestyles and rural areas to move to cities or work with the mines. Not all people benefit equally from the boom, and growing income disparities push those who are left out to seek new ways to earn income.

The development of mines, roads and new settlements is disturbing important archeological sites, and people searching for easy money are looting sites looking for items to sell into the growing black market. Mongolia’s archeological sites are generally easily accessible and visible given the local geography, but few have been systematically recorded or studied. Many sites are being looted before a record is made describing the site and important artifacts, making it difficult to both gather crucial information from the site and to document the existence and origin of objects. Mongolian artifacts are appearing in international auctions, but in many cases authorities cannot prevent sales or assert ownership rights due to the lack of documentation of objects and sites. These issues were highlighted in 2012 when a Tyrannosaurus Rex skeleton from Mongolia appeared in a private auction in New York, and Mongolian President Elbegdorj led a successful effort together with the US government to halt the sale and return the skeleton to Mongolia. This artifact was just one of many that have left Mongolia under dubious circumstances, and highlighted the need to improve the documentation and security of objects of national importance within Mongolia.

See Archive of Past Programs
Scroll to Top
Skip to content